... to Green Hype, the collective run by Joy. The collective was prevously known as Filipina Princess and was opened sometime in January 2003. Please enjoy your stay!

I arrived around 4:30 PM. My mom had just driven by Mojoes when I saw Jacob. I said to my mom that is one of the guys from O-Town. That is Jacob. My mom stopped the car. I rolled down the window and waved at him. He came towards the car and I opened the door. He shook my hand and said, "Stay Warm." I said, "Jacob this is my mom." We parked the car and went to Juliet's because I had to use the bathroom. I arrived at Mojoes around 4:45 PM. There were three girls already there. Two black girls and one white girl. Two black girls were standing in a parking space. One of them said that Todd Carey asked them to save a parking spot for him. He said he would give them a CD if they did.

Todd Carey parked his car and stopped by to say hi to everyone. He hugged everyone and took pictures. He is so nice. He made a fan out of me. 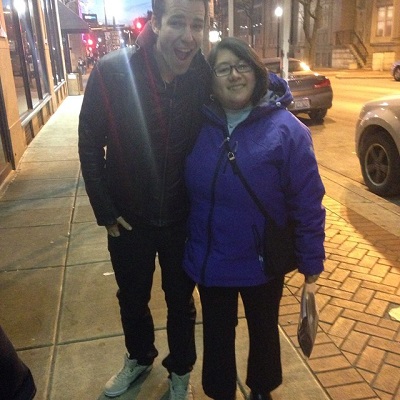 This girl with her mother showed up. They are from Effingham, IL. We waited awhile and then O-Town showed up to do sound check. They brought everything into the place. Jacob stopped to hug everyone. Erik-Michael smiled and waved from across the street. I love his smile.

Jessica and Cassie showed up. They hugged me and then went to hand out bracelets to everyone that was there. They gave each of them a bracelet of their favorite guy. After everyone got bracelets Jessicca said I get a bundle of all 5 bracelets for saving a spot in line for them. They talked about who they were, that I won a ticket from them and how I won.

7 of us stayed inside because it was freezing. We were able to go inside first. A guy asks for your ticket plus ID. Then you go inside where one of two guys will ask to see your ID. If you are 21 or over they give you a wristband so that you can buy drinks. Jessicca and Cassie stood dead center of the stage and Jessicca motioned for me to stand next to her. The opening opener was Chris Coon. Three times he went up the little platform where the table with Jacob's laptop was and kept jumping and moving around. Jacob's laptop was shaking all three times. I thought it was going to fall. Jessicca next to me kept screaming at him saying, "What are you doing? Stop, get off of there." She was throwing her hands trying to get his attention.

Next was Todd Carey. He did some of his songs from his latest album, a medley of boy band songs, a song he co-wrote for Meghan Trainor, and his new single, Nintendo. Nintendo is my favorite song of his.

Then Trevor introduced the three guys starting with Dan, then Erik-Michael and then Jacob. Jacob introduced Trevor. Then they sang: 3. I Won't Lose 4. Love Should Be a Crime 5. We Fit Together 6. Wobble 7. Right Kind of Wrong 8. I Showed Her 9. These Are the Days

They left but eventually came back out to sing: 15. All or Nothing 16. Chasin' After You

When you get inside you give Chris (their tour manager) your phone or camera and then Dan says, "Hi, I'm Dan." Then he shakes your hand and hugs you. He asks me if I've met Jacob and I said yes, outside. Then Jacob hugs me. After that I was just too excited to hug Erik-Michael so I just went up to him to hug him. He smiled at me and asked me what my name was. I said Joy. He said, "Nice to meet you Joy. Did you like the show and did you have fun tonight?" I said yes. I had the best time ever. I hugged Erik-Michael and didn't want to let go of him. Then I heard one of the guys say, "What about Trevor?" I let go of Erik-Michael and hugged Trevor. Then I stood between Erik-Michael and Trevor and Chris took the picture. Chris was about to give me back my phone when I asked Erik-Michael if I could have one with just him and he asked Chris to take the picture of just us two.

Best night ever. I had the time of my life. Thanks O-Town and Erik-Michael Estrada. I'll never forget this.

When I went inside I asked Dan Miller if they are signing the t-shirt and he said that they didn't have a pen and I didn't have one either so i didn't get the t-shirt signed. I had bought a small because I wasn't gonna wear it. I was gonna get it signed and frame it. Next time they are in town I will have to go and do another meet and greet and get it signed then. I'll bring a silver pen then. This was my first meet and greet so I didn't know what to expect. Now I do know. 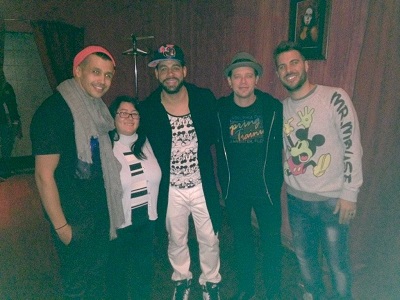 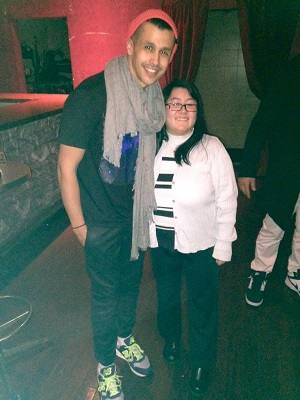